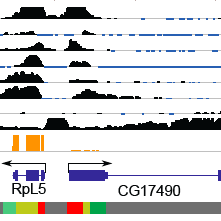 The data sets were generated by the modENCODE (model organism Encyclopedia of DNA Elements) and ENCODE consortia in 2007-2012, funded by the National Human Genome Research Institute (NHGRI). Please see http://www.genome.gov/modencode/ and http://www.genome.gov/encode/ for more information about the projects.

These data consist of ChIP-seq and ChIP-chip profiles for histone modifications and chromosomal proteins in fly, worm, and human, as well as several related data sets. The ChIP-chip datasets were produced on Affymetrix (fly) or NimbleGen (worm) arrays. The ChIP-seq datasets were generated on the Illumina sequencers.

For background on the ChIP-seq workflow by the consortium, please see Landt et al., ChIP-seq guidelines and practices used by the ENCODE and modENCODE consortia, Genome Research, 2012.

This table contains a complete listing and detailed meta-data for all chromatin date sets, including links to the source files.

View as a Google Spreadsheet or download as an Excel file.

The input normalized profiles are availabe at ENCODE-X Browser. The procedure for normalization of these profiles is as follows:

To enable the cross-species comparisons described in this paper, we have processed all data uniformly across all species using MACS. For every pair of aligned ChIP and matching input-DNA data, we used MACS version 2 to generate fold enrichment signal tracks for every position in a genome:

For the fly data, genomic DNA Tiling Arrays v2.0 (Affymetrix) were used to hybridize ChIP and input DNA. We obtained the log-intensity ratio values (M-values) for all perfect match (PM) probes: M = log2(ChIP intensity) - log2(input intensity), and performed a whole-genome baseline shift so that the mean of M in each microarray is equal to 0. The smoothed log intensity ratios were calculated using LOWESS with a smoothing span corresponding to 500 bp, combining normalized data from two replicate experiments. For the worm data, a custom Nimblegen two-channel whole genome microarray platform was used to hybridize both ChIP and input DNA. MA2C was used to preprocess the data to obtain a normalized and median centered log2 ratio for each probe.

To identify broad H3K9me3+ heterochromatin domains, we first identified broad H3K9me3 enrichment region using SPP (Kharchenko et al.), based on methods get.broad.enrichment.cluster with a 10 kb window for fly and worm and 100 kb for human. Then regions that are less than 10 kb of length were removed. The remaining regions were identified as the heterochromatin regions.

The data were downloaded from Dixon et al., “Topological domains in mammalian genomes identified by
analysis of chromatin interactions”, Nature (2012)
(for human embryonic stem cells) and Sexton et al., “Three-dimensional folding and functional organization principles of the Drosophila genome”, Cell (2012) (for fly late embryos). The human coordinates were originally in hg18. We used UCSC’s liftOver tool to convert the coordinates to hg19. Here are the genomic coordinates used in our study:

There is no known published Hi-C data for worm.

Based on the observation that each Hi-C-defined topological domain is usually uniformly enriched for similar chromatin-states, we tested the idea of whether correlation of histone modifications between different chromosomal regions (within each chromosome) could be used to infer topological domains and their boundaries. Here are the inferred domain definition and the boundaries.

The classification was optimized to obtain a high confidence set that is not necessarily very inclusive. For additional information please see the README file in the archive.

Data and the description of these data can be found at the modENCODE/ENCODE transcriptome page.

We generated empirical genomic sequence mappability tracks using input-DNA sequencing data. After merging input reads up to 100M, reads were extended to 149 bp which corresponds to the shift of 74 bp in signal tracks. The union set of empirically mapped regions was obtained. They are available here:

In addition to this empirically derived genome-wide sequence mappability tracks, we could also compare them with known unassembled genomic regions by considering the “Gap” table from the UCSC genome browser:

There are no known unassembled regions in worm.

Briefly, short 5’-capped RNA from total nuclear RNA of mixed stage embryos were sequenced (i.e., capRNA- seq) by Illumina GAIIA (SE36) with two biological replicates. Reads from capRNA-seq were mapped to WS220 reference genome using BWA. Transcription initiation regions (TICs) were identified by clustering of capRNA-seq reads. In this analysis we used TICs that overlap with wormbase TSSs within -199:100bp. We refer these capRNA-seq defined TSSs as capTSS in this study.

We downloaded the 5bp GC% data from the UCSC genome browser annotation download page for human (hg19), fly (dm3), and worm (ce10). Centering at every 5 bp bin, we calculated the running median of the GC% of the surrounding 100 bp (i.e., 105 bp in total). GC scores were then binned into 10 bp (fly and worm) or 50 bp (human) non-overlapping bins.

PhastCons conservation score was obtained from the UCSC genome browser annotation download page. Specifically, we used the following score for each species.

PhastCons scores were then binned into 10 bp (fly and worm) or 50 bp (human) non-overlapping bins.